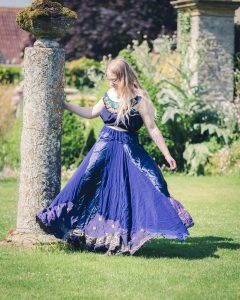 Have you ever wondered what goes on behind the scenes of a fairytale fashion photo shoot?

I recently watched a behind-the-scenes video of Victoria from In The Frow being the model for her recent jewellery collaboration. The production was HUGE! As well as hiring out a lovely house with a swimming pool to be their photography location, they had about twenty people about, including hair stylists, make-up artists, a photographer, a photographer’s assistant, and many other people who’s function wasn’t entirely clear to me, but I’m sure they had to be there.

It isn’t like that for Threads of a Fairytale!

This is just me as the photographer and most of the roles listed above, and whichever daughter I can rope into being my model, who does her own hair and make-up. And truth be told, this is the situation for most handmade sellers online. We don’t get a whole team to help us out, but I still think we do a pretty good job anyway!

I’ve been a busy bee making loads of clothes this year, so I had several fairytale outfits to photograph recently. I split them in half for each daughter, and first of all, Rain and I did a photo shoot in some stately home gardens. They were open to the public, and quite busy, so Rain had to do several quick changes whilst hiding behind ornamental hedges and flower beds.  This is while I’m carrying around a large straw basket of clothes pretending it’s full of a picnic, even though fake flower props were sticking out the side!

The next photo shoot was slightly less stressful as there were less people about, but we were still on a time limit as the car park shut at seven. Jude was able to get changed in a discreet wooded area for the first few outfits, and then as we moved to the castle, luckily she could change in a ruined turret between the visits of tourists. It was good fun, but we only just had time for the last dress, and I was still running up the hill at the end to get to the car before the barrier was locked!

Yes, my photos don’t look like they have the high production value that you see in fashion magazines, but I do think they suit my fairytale brand. This is just me after all; a handmade clothing maker running a solo business. They’re natural, they’re taken in magical locations and I know I’m biased, but I think my models look beautiful.

Now I have the photos, I’m currently listing all the new items of whimsical bohemian clothing, so go over to the shop and see if you can spot them!